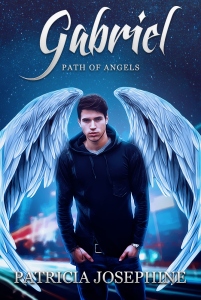 The end is in sight.

To stop Uriel from freeing Lucifer, Gabriel and his brothers must fall and go to Hell. It is a sacrifice Gabriel is not entirely ready to make. Will he fight alongside his brothers or forge his own path? There is only one choice.

Alexander doesn’t want to help Uriel nor does he trust him, but the angel has promised him a better life. He swore to protect Charlie, and he’ll do whatever it takes. When he meets the archangels and learns the depth of Uriel’s lies, he understands the true meaning of sacrifice. If there’s any hope of stopping Lucifer from being freed, Alexander, Charlie, Zephyr and Lake will have to get to Hell and help Gabriel and his brothers in the fight against Uriel.

The path is finally ending, but the price may be too high.

My Review of Gabriel

Genre: Fantasy/Paranormal
Warning: some LGBT
This was an exciting ending to this series. Gabe was reluctant to begin this journey and carried his anger, fear and loneliness with him. I learned more about his character and source of his anger when he journeyed back to his hometown. How dreadful and heartbreaking that experience was for him. He desperately wants to just lead a normal life, love and be loved as his brothers have found mates. His rage at God for the path he must follow drives a wedge between him and his brothers. In order to stop Lucifer from being released on earth, he knew he must fall from God’s grace, but he is very reluctant to do so. His meeting of Alexander and Charlie (both nephilims) helped him to see and follow his God chosen path, albeit, reluctantly.
I found the character of Charlie most interesting even though she doesn’t speak. Author, Patricia Josephine has fleshed her out nicely. We don’t learn the incident that caused this only that it was a past trauma. I enjoyed this series immensely.

What’s in a name?
Gabriel
Angelic Messenger
Gabriel, an archangel and one of the two highest ranking angels in Judeo-Christian and Islamic lore. Her name means “strength of God”. She is a unique archangel in the sense that it is almost certain she is the only female angel in the higher echelons, although some believe there are no female angels. Gabriel fosters joy, truth, justice and love. She grants wisdom in interpreting our dreams and visions.

Well, in Path of Angels Gabe is a guy and would probably be grumpy to read this. He is all about justice though. Love, he wants it for sure, but isn’t very open about it. He’s really a big grouch.

Selective Mutism
When I was writing book four in the series, I knew right off that Charlie wouldn’t speak. She can speak, but chooses not to because of an event in her past. It was a slow evolution to being mute too. Little by little, she said less and less until by the time Alexander meets her, she barely speaks. (When she was in school, she would if called upon, but she never went out of her way to talk.)

In the first draft, she did have one line, but then I cut it. After getting beta notes and editor notes, I ended up having her speak again when I completely rewrote chapter four. I thought it would add a little weight to the scene. If she was saying that then it was important.

What causes Charlie not to speak isn’t shown in the story because Alexander accepts it as part of who she is. He’s spent his whole life being judge, so he vowed never to judge her when she offered friendship so freely. I also didn’t want to make it a big deal, like it was something to pity her for. Charlie doesn’t speak, but she knows how to be heard.

Patricia Josephine never set out to become a writer. In fact, she never considered it an option during high school and college. She was all about art. On a whim, she wrote down a story bouncing in her head. That was the start of it and she hasn’t regretted a moment. She writes young adult under the name Patricia Lynne.

Patricia lives with her husband in Michigan, hopes one day to have what will resemble a small petting zoo, has a fondness for dying her hair the colors of the rainbow, and an obsession with Doctor Who.

One thought on “Gabriel, Path of Angels Book 4”

I would love to hear your thoughts and ideas Cancel reply

Walk Your Way to Health Benefits

Let Me Tell You a Story

Living Through the Pandemic

Time for Truth–Overtime, in Fact